• Pickup from your Chosen location.
• Private Guide and Vehicle for Your Tour.
• Create your own Itinerary, with our Guidance.

Book Your Tour Now with just a 10% deposit.

There are also opportunities from this Tour to visit some of the film locations from the “Game of Thrones” such as the “Dark Hedges” and Ballinatoy.

From Dublin we drive north to Belfast, which is approx 2 hrs drive into Northern Ireland.

Belfast is the main city of Northern Ireland. It is a small city and one of Ireland’s first industrialised due to the deep port here.

On this private day tour there are a number of locations to visit that you can choose from.

In Belfast you can do the famous “Black Taxi” tour which gives you a personalised insight into the recent troubles in this part of Ireland. You may also wish to visit the birth place of one of the most famous ships in the world the “Titanic”. You could also choose to just simply walk about the city centre.

You will travel up along the Antrim Coastline after leaving Belfast. Passing through small coastal villages such as Ballycastle and Ballinatoy. The latter is where many scenes from the “Game of Thrones” were filmed as well as being the location for the Carrick-A-Rede rope bridge.

This is an old rope bridge that was used by local fishermen for catching salmon but today there are more tourists than fishermen.

Giant’s Causeway: From here you travel along the coastline to the World famous “Giant’s Causeway”. The Giant’s Causeway is a Unesco World Heritage Site. It is the aftermath of volcanic crashing, burning and cooling. It’s an epic 60-million-year-old legacy to lava. With over 40,000 basalt columns which are interlocked.

Apart from the science it is also a truly incredible place to visit and of course the Irish have their own theory about these stone structures. 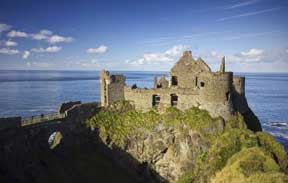 Wherever you choose from your Private Tour, these are just interesting places to choose from.

Q. Is this suitable for just 2 people?

A. Yes, This is not a problem.

Q. Can we choose what we would like to visit?

A. Yes, this is your private tour and you can create your Itinerary with our Guidance.

Q. Can I choose to do an actvity?

A. Yes, as long as you give us notice of the activity you would like to do.

Q. What size groups can you cater for.

A. We can accommodate larger groups than 8 people. Just contact us for a quote.

Includes:
• Pickup at your Accommodation, Airport or Port in Dublin
• Comfortable Transport for the tour
• Qualified and Friendly Guide to keep you well informed of the areas visited
• Your own personal Itinerary of places you would like to see or visit.
• A more intimate tour for you and your group.

Does Not Include:
• Entrance fees – but you do get great discounts from this tour.
• Lunches, Meals or Drinks.

(For groups larger than 8 please contact us at info@hilltoptreks.ie for an Itinerary and quote)

The pickup location in Dublin for this tour is chosen by you. You specify this while booking.

It can be your Hotel, Accommodation, Port or Airport.

What to Bring for your Tour

Back
Scroll to top