The trail is between the towns of Cashel in Tipperary and Ardmore in County Waterford. It is an ancient pilgrim path that was once travelled by St Declan as he made his way to the Rock of Cashel. His journey was to meet with the Kings of Munster. It is also said that he once met St. Patrick here.

The trail itself is approx. 110Km in length and passes through some wonderful countryside and small towns along the way. It is mainly on small quite roads apart from the section over the Knockmealdown Mountains. There appears to be two paths you could choose across the mountains.

The official route appears to go up towards the Liam Lynch monument and over the side of the hill using forest tracks and roads. While another route brings of the Liam Lynch route over the mountains between Knockmealdown and Knocknagnauv and a more direct way to Lismore.

I was organizing this route for a group who had requested a walk there. It can be broken down over several days usually 5 Days and in either direction. I had decided that I would like to finish at the sea, so went in a North to South direction. I also noticed that there was a lot of road on this route, so I would cycle it.

So, I got up early on June 22nd 2021, one of the longest days of the year and made my way to Cashel by 9am, just 1.5 – 2hrs drive from Dublin. Parked up near the Rock of Cashel and put on some sun cream as it was also a very warm day. I had organised to get back with a local taxi man to pick me up from Goatanbridge approx. 38Km from where I was starting from. 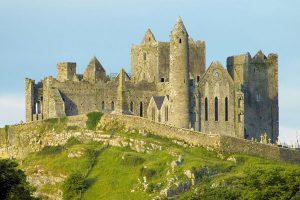 The Rock of Cashel is a beautiful landmark in south Tipperary and was once the seat of the high kings of Munster. It sits 200m above the road and is very impressive looking as you approach the town of Cashel. Legend has it that the rock on which it sits known as the “Devil’s bit” landed here after St. Patrick banished Satan from a cave 20 miles away, so it is also known as St Patrick’s rock. In the 12th century Murtagh O’Brien donated this fortress to the church and local monks. There are many incredible buildings with its walls and well worth a visit before your walk. This is where St Declan would have to come to get permission to build his monastery in Ardmore.

I walked through the town taking in some of the local sites and following the small blue signs as I made my out the South end and back over the motorway. Once I was over the motorway, I was on a small quite country road that would be just used for local access. So, I started to cycle from here. The route is very flat with small farmland on each side of barley and wheat. Just continue on this small road with one or two crossings until you reach the town of Cahir after approx. 20km. As you enter Cahir you will pass the Church of St Paul, it was built in 1816 -18 and is one of only two churches designed by the celebrated English architect John Nash. 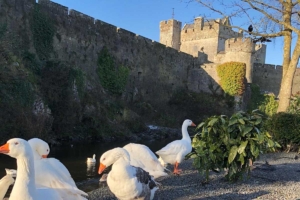 The Town of Cahir was basically built up around an ancient fortress and where a Castle still stands today on the river Suir. The Castle was the stronghold of the O’Briens, bulit from 1142 by Conor O’Brien, Prince of Thomond. It later went into the hands of the Butler family. It is one of Ireland’s largest and best-preserved castles. You can get tours of the castle here daily.

I stopped in Cahir for a coffee and a bite to eat and visit the Cahir House Hotel, where I have stayed many times.

I then continued on my way from the Castle along the left-hand side of the river Suir through a park towards the Swiss Cottage. Once I reached the bridge for the cottage I stayed on my side of the river and continued for another 4Km until a little blue marker pointed me to the left. Through a small track and out another a road and across to a smaller road. Staying on the small roads following the blue markers I soon reached the town of Ardfinnian, with a very impressive bridge back over the river Suir. I turned to the right once over the bridge and walked through the town or main street with its nice park alongside the river. The blue sign then took me left again and away from the town up a few steps and out onto a very nice country road with green grass through the centre of it.

Straight ahead I could see the Knockmealdowns and where I would have to cross over eventually. You will pass by the Fever Hospital and Ladies Abbey, where an order of the Franciscans stayed until it was plundered by Cromwell forces in the late 1600s. The trail brings you to the small river Tar and here there is a pedestrian bridge. It was such a warm day I was very tempted to get in for a swim.

Now I had a conundrum, I was just at Goatanbridge and it was only 2pm. My phone was about to die and the taximan rang me about picking me and what time. I wasn’t too sure of the track ahead but I knew that it was over a mountain and I had to decide where to push on or wait for the taxi.  It was such a great day I decided to push on and asked the taximan (Kevin), I would meet him in Lismore for 4pm. Right so the pressure on now I had to get to Lismore for 4pm, my phone went on strike and I had a mountain to get over.

Before my phone went completely, I had a quick view at the map and noticed that there was a forest trail that would bring up by the Liam Lynch monument and of to my left to another road over the hill. Strange enough this was also the way that the blue markers brought me.

It was a tough enough cycle up the forest track and I stopped at the Liam Lynch monument. 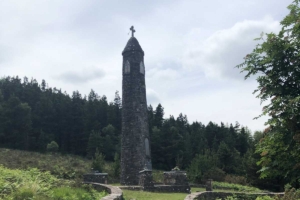 I had some lunch here that I had brought with me and took in the views of Tipperary out in front. Put on some more sun cream and got back on the bike looking for this trail to bring me to back onto the road, I didn’t fancy dragging my bike over a mountain.

I eventually came out onto the road and noticed the blue sign s for St Declan’s Way again in front of me. I continued on this road and wasn’t aware of another hill I had to go over, hopefully this was my last, which it turned out to be. I noticed that the blue signs were going right into more woodland but I was now under pressure to get to Lismore to meet my taxi at 4pm and it was already quarter past three. I passed by the entrance to Mount Mellery Monastery on my way to Cappoquin.  Mount Melleray Abbey is a Trappist monastery in Ireland, founded in 1833.

Once I reached Cappoquin, I popped my head into a craft shop to make sure I was going the right way to Lismore. Yes, I was told its all on the flat for approx. 7Km. following alongside Blackwater River. Arriving into Lismore, the first thing you notice is the most incredible looking castle reaching out above the canopy of the trees.

Lismore Castle, is situated on the site of the old monastery since medieval times and was once owned by Sir Walter Raleigh, (yes, the potatoe guy) and Robert Boyle (of Boyle’s Law), known as the “Father of Modern Chemistry”. Today, the castle continues in the private ownership of the Dukes of Devonshire who open the gardens and parts of the grounds for public access via a changing programme of local arts and education events.

I had made it to Lismore, a little late and my legs, like my phone were about to pack in. I saw Kevin sitting in his minibus outside the AIB and the rest was a nice chat back to Cashel.

To be continued from Mount Mellery onto Ardmore next time. 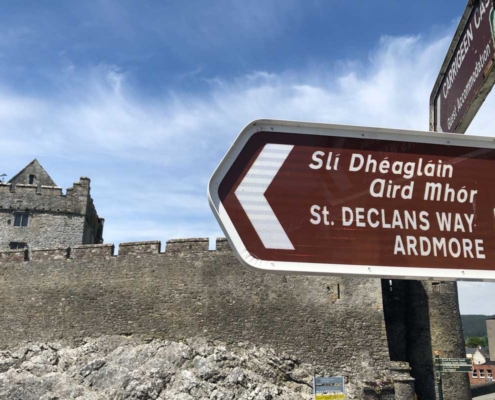 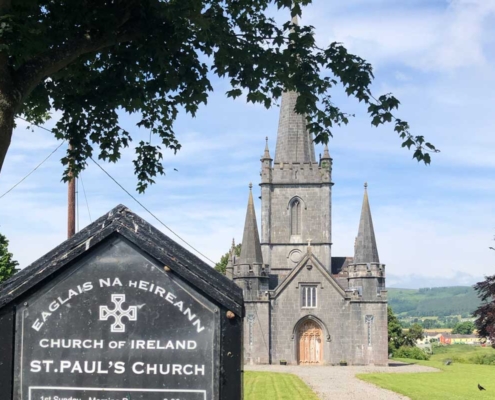 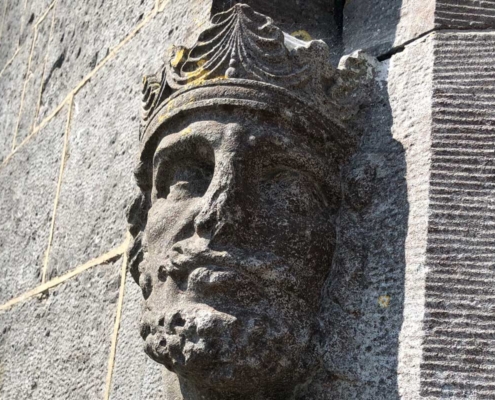 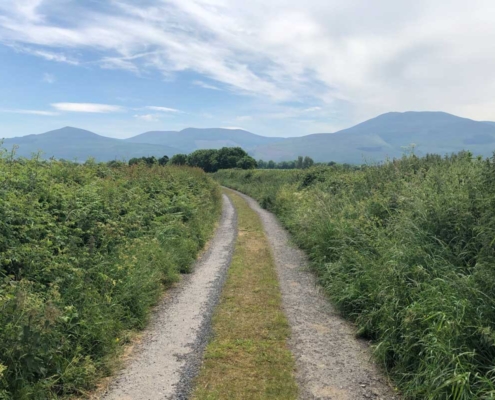 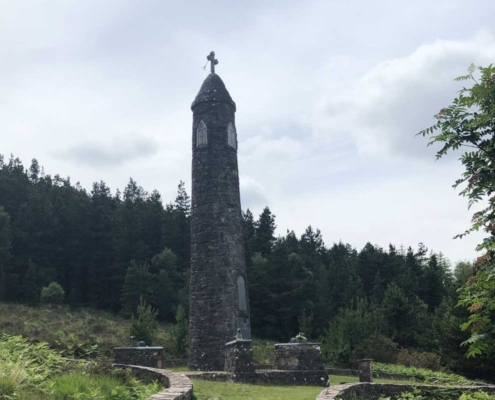 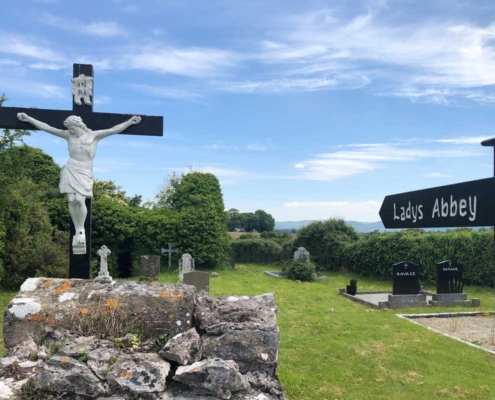 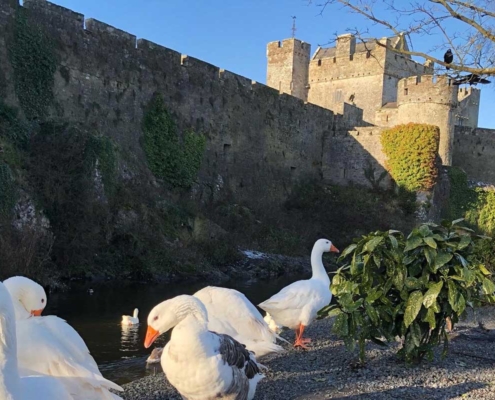