– This Article was Written by Gillian Duggan – Mushroomart.ie

Wales is home to three national parks and ten million castles (I exagerate but only slightly!)

It is also the only country in the world with a continuous waymarked path around its entire coast at 1400km. It is full of spectacular scenery, fortified towns and cities steeped in tradition and history.

Wales is just 27 nautical miles from Ireland at its closest point, the Llyn Peninsula and Wicklow Head and Dublin to Holyhead is 66 nautical miles which is 75 miles or 122km.

There are plenty of historical records of Irish pirates raiding the Welsh coast back in the day not forgetting our St Patrick, who was most likely Welsh, trained as a priest in South Wales and is commemorated there in more than one early Christian church.

In the Mabinogion, the Welsh equivalent of our Annals of the Four Masters, one of the stories is about Branwen ferch Llŷr (Branwen, daughter of Llŷr) and her marriage to the King of Ireland, Matholwch – it doesn’t end well!

So, lots of connections between Wales and Ireland – What’s not to like!

With this in mind, the (now) famous five, Terry, Dairine, Dermot, Deirdre and myself recently headed off across the Irish sea, on a bright crisp Autumn morning, on a fact-finding road trip to Wales. The idea being to bring a couple of groups over to Wales to hike Mount Snowdon and generally have a ball in our closest Celtic neighbourhood – Covid permitting, of course.

We thought sure while we were there, we’d hike Snowdon, Corn du & Pen y Fan ourselves while we were at it – it would be rude not to!

The sunrise as we left Dublin Port was stunning, the sea was calm, the sun was shining, the weather warm and the company great. 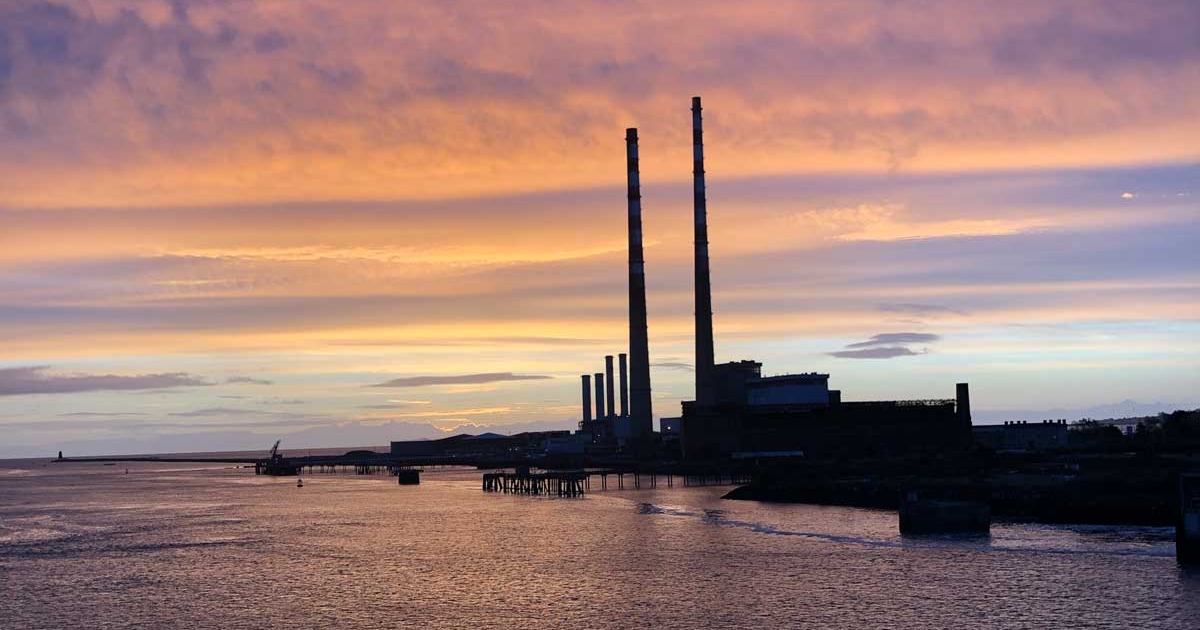 We drove straight to Llanberis, a small town at the foot of Mount Snowdon, the centre for outdoor activities in the Snowdonia National Park. Everyone local was speaking Welsh which was great to hear. Llanberis bears the scars from its slate quarrying history and the cable car and Snowdon railways start from the village. There is also a Park & Ride service. It was buzzing with families, students and school groups on their midterm break.  We grabbed a sandwich on the hoof and headed up to the trail head to scout out the small carpark which must be booked in advance hence the park & ride service.

Ty Hyll aka The Ugly House

Then we travelled to The Ugly House at Ty Hyll and went for a walk around the hills, through the woods, by the lakes and over the mine shafts. The Ugly House or Ty Hyll tea room looks just like something out of a children’s story book.  Its’ origins are unknown and bockety yet cute would be how I describe it.

After a lovely sunny afternoon stretch of the legs, we travelled to Betws-y-Coed where Terry has been thinking of basing his group.

This pretty little Alpine-like village is built out of the local grey stone with small shopping streets weatherproofed by canopies and covered in fairy lights. Perfect for these Covid times.

There is park & ride service up to Snowdon from here too, a couple of hotels, guest houses and, nearby, is the longest Zip Line in the UK. It would be a great base for a trip to Snowdonia.

Next stop was Llandudno, a seaside resort on the northern coast of Wales. I had only ever sped by it on the way to somewhere else so it was nice to stop and explore this famous Victorian tourist resort.

It is said that on a summer’s day, Llandudno has the look of the Promenade des Anglaise on the French Riviera. Needless to say, we weren’t there on a summer’s day! It has a long-arched pebble beach and Promenade with a Bray Head on either end. One is called the Great Orme, a limestone headland with the last cable tramway in the UK. 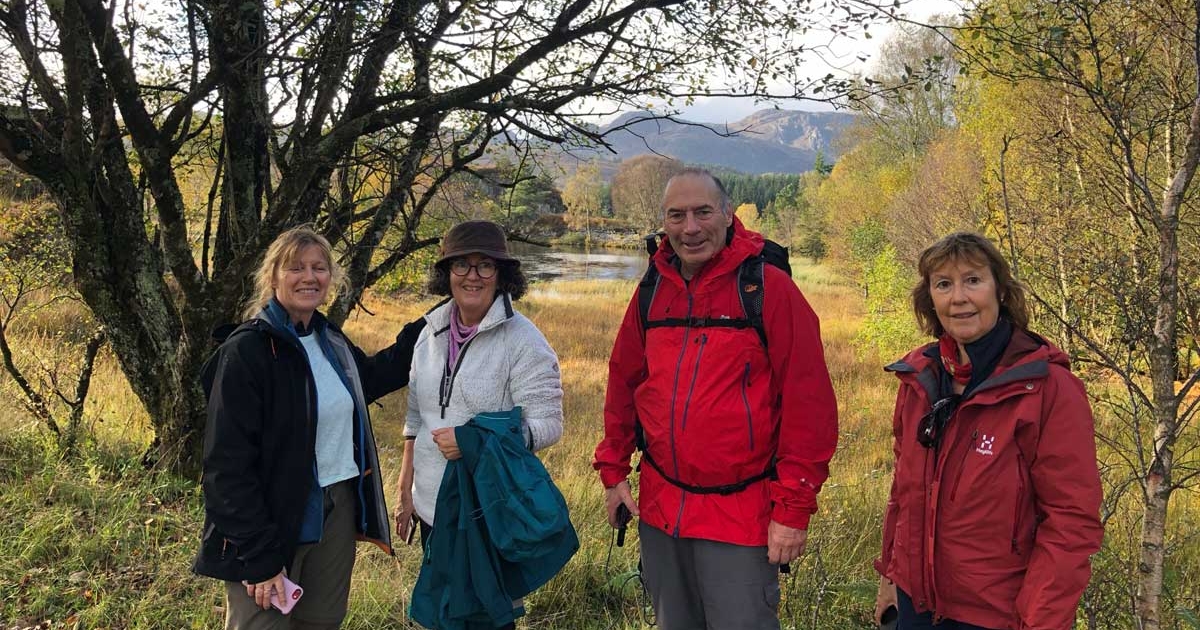 In 1848, a Liverpool architect, Owen Williams put forward plans to develop the small village into a holiday resort to the local landlord, Lord Mostyn. The town boomed and became the resort of choice to the people of Liverpool, Manchester, Crewe and the West Midlands. The railway came in 1858 and became the major ferry port for Ireland. This didn’t last long because the following year a storm damaged the pier and the operation was shifted to Holyhead.

Fashions change and the 20th century decline in UK home tourism has taken its toll. The once grand Victorian townhouses that line the seafront are now mostly low-grade hotels, B&B’s and nursing homes.

As soon as we dropped off our bags, we trotted around to the high street in search of a pub, met Alan Carr, had a few drinks, discovered it wasn’t Alan Carr but a really good look-a-like with an expensive and gorgeous jacket! 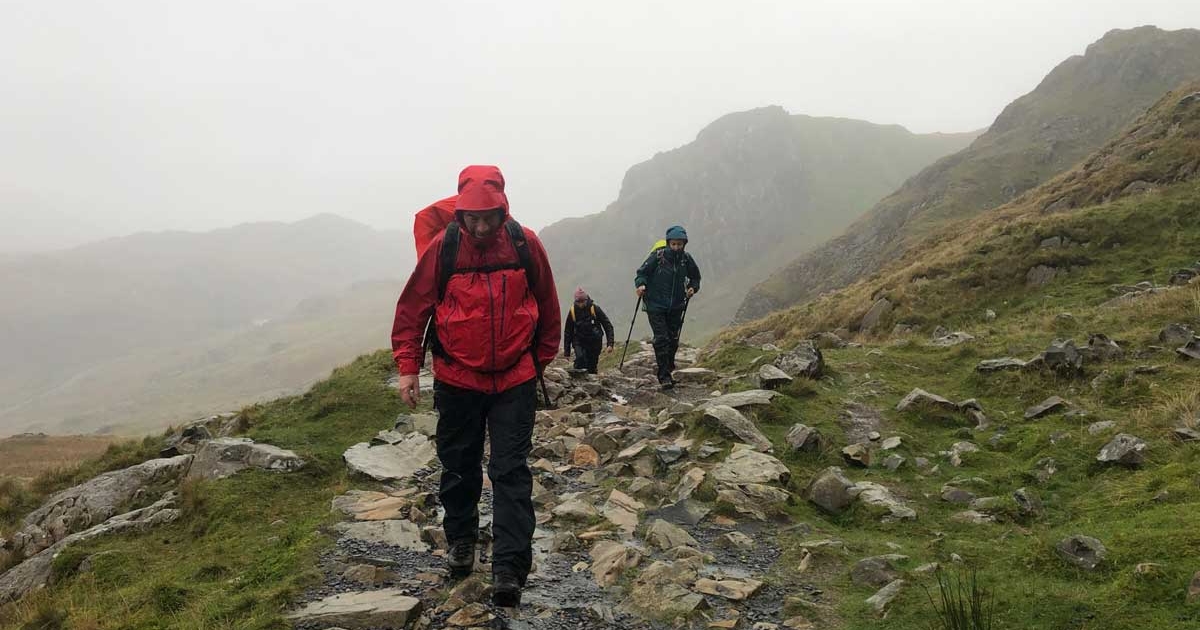 Next day, it was back up to Snowdon and a fabulous day’s hiking was had by all. Now, it did rain and rain and rain plus it was windy. There were loads of steps, we couldn’t see anything from the top but it was great to complete.

Some had gear failures but as per Lieutenant Lamberts instructions, we had a change of clothes ready and started the three-hour drive to Llanwrtyd Wells, the smallest town in the UK.
We travelled through the Cambrian Mountains to the edge of the Brecon Beacons and our next stop.

Llanwrtyd Wells
Our hotel, The Neuad Arms, has been accepting guests for over 145 years. They say ‘Its 19th century character, complete with open log fires, has been preserved in the lounge and public bars’, I would say more accurately, its 19th century character has been preserved by the sloping stairs, floors and furniture! This family run hotel was very friendly, the locals chatty and the bedrooms warm which was just as well because we had a lot of gear to dry overnight. One of us got lost in the hotel but, thankfully, was found in a cupboard and this was before we got to the bar!

The Language
While Irish and Welsh originate from the same source, the written and spoken forms are obviously different. A Welsh speaker would find it hard to understand Irish Gaelic and vice versa. The alphabets are different too – the Irish alphabet uses 18 letters, while the Welsh alphabet has 29 which I think explains a lot.
We tried hard to pronounce Llanwrtyd but decided Welsh should go home – Its drunk!

The Brecon Beacons are in South Wales with a landscape more akin to Wicklow while Snowdon is more like Kerry i.e., Bog covered versus rocky.

They have a steep and dramatic landscape formed by glaciation with winding rivers, great waterfalls and lots of rolling valleys, wide open hillsides, lakes, forests and caves. It has been further shaped by 19th C mining and quarrying.

Next day, we drove to climb the twin peaks of Pen y Fan (886m) and Corn Do (873m), the first and second highest peaks in South of Britain. These are the main hillwalking attractions in the national park and with a good path all the way, very popular with locals and visitors alike.

Overnight, we had dried our gear (bar the boots) but we needn’t have bothered because, as my mother used to say, there was ‘Great drying to be had’. The. Wind. Was. Fierce. I had to hold onto Deirdre, we had to share my poles and my brand new, very expensive rucksack rain cover blew off and I reckon was somewhere in the Wicklow Mountains within the hour.

Terry and Dairine continued to do the loop, Dermot, Deirdre and I headed back to the car, have our lunch and pick them up from the other side of the valley. The sun came out for them and their photos are awesome.

We then drove to Brecon town where we had a couple of hours to spare for the first time all week and we all had a mooch around the shops. Dinner was in our hotel and the menu was interesting eg The Brains Burger. We learnt it was owned by the Brains Brewery but a little off putting for those of us not in the know about British breweries, nevertheless.

On the last day, we had a lovely breakfast across the road and drove to Fishguard to get the 1pm ferry home. After the wind the previous day, we were armed with Quells, the travel sickness tablets, but, inevitably, we were delayed and re-scheduled to Irish Ferries from Pembroke Dock.

In the meantime, Terry had practised his uilleann pipes much to the surprise of the locals and passing English tourists, the van was cleaned, luggage sorted so the afternoon was not wasted. The ferry sped across the sea, made up some time and we were all back home by midnight, a long day but a fantastic week!

For Pen y Fan and Corn du, there are many options and the most popular is an 8.5km loop from the Storey Arms carpark on the A470. Total height gained is 460m and takes about 3 hours. The OS map is OL12.

The unpredictable weather in both areas would make me classify these routes and moderate to difficult.

This Blog was Written by Gillian Duggan – Mushroomart.ie