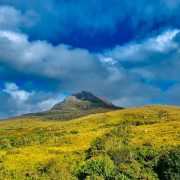 Walking in the Wilds of Connemara and Mweelrea. 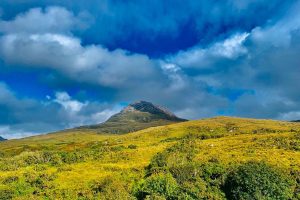 Connemara is a region in Galway in the west of Ireland. It reaches out to the Atlantic Ocean with its Jagged coastline of cliffs and beaches; it also hosts Ireland’s only Fjord. There are two main mountain ranges in this region the 12 Bens and the Maumturks. Both ranges offer incredible walks and scenery that can be admired even from your car as you pass through them.

On this weekend we visited the Connemara National Park with its entrance in the small town of Letterfrack. As we were traveling from Dublin separately due to the ongoing COVID restrictions we decided that we would meet here on the Friday afternoon to walk Diamond Hill, just over 400m. The walk is an easy type starting from the visitor center and can be done self-guided. There is a very good well-maintained track that actually directs you in a one-way clockwise direction around the hill. 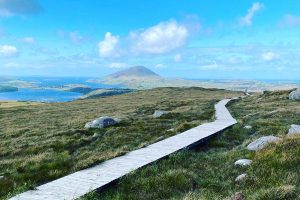 The views from this hill are very rewarding for the small amount of effort it takes to climb it and a great place to point the other walks we will be doing over the weekend. Form the Hill you are looking across the Atlantic with views of the Inisturk and Inisbofin islands. To your north sit the 12 Bens and to your east the Maumturks and just below you to the west are Klymore Abbey and gardens. We split the group into two as there were 24 of us and it was a max group size for the outdoors of 15 people, we kept within viewing distance of each other though. 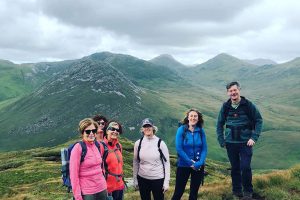 Group with 12 Bens as Backdrop

We all managed the walk very easily and loved the trail and the spectacular views.

When we had completed the walk, we made our way to Clifden where we would be staying for the next two nights. I had booked the group into the Alcock and Brown Hotel and The Arch Guesthouse We had some time to freshen up before having dinner and catching up on the days events and planning out our big walk for the next day Mweelrea (814m), Connaught’s highest mountain. We also had some time to enjoy a drink at the bar which in these COVID times is very inviting. 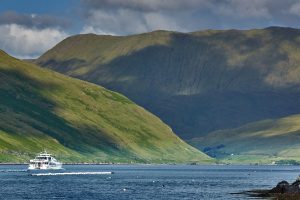 The following morning after an early breakfast we made our way out to Silver Strand in Mayo, although there are a few Silver strands so be careful as one or two of our group found out. It’s about 1,5-hour drive from Clifden but again through incredible landscapes as you drive. You will travel alongside Killary Fjord both the Galway and Mayo side and into one of Ireland’s most scenic Valley, Glendoo. There is a cross in this valley to mark the tragic scene that unfolded here in 1849 during the famine. Where many people died of starvation and exhaustion after being made to walk almost 40Km to sign for their famine relief.

Upon reaching Silver Strand you will see Mweelrea sitting over you and usually with clouds covering it’s top. At the 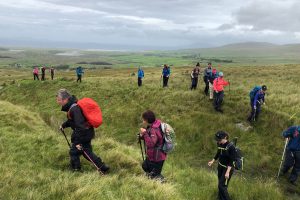 car park we all geared up checking our food rations, water etc and the made our way towards the start of our climb. It’s a wet mountain at it’s base normally and was very wet today due to the rain fall we had the previous week, where the town of Clifden was actually flooded.

The trail from this side follows a river all the way up to a saddle almost at the top. After plenty of scenic stops to take pictures and catch our breath we made our way to the saddle. It’s a climb as soon as you leave the car park at the beach, so the saddle was a welcomed if short relief from the steep ascent.

From the saddle we turned right to the edge of the cliffs of the east side and followed these to the summit. 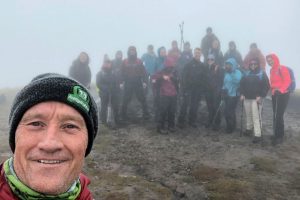 We didn’t hang about as visibility was very poor and it’s also quite cold at the top. So, some quick snaps of happy heads on their achievement of getting to the summit and then it was straight back to somewhere less windy for a bite to eat.

Making our way down we could really enjoy the view of the coastline and its beautiful looking sandy beaches, which there was some talk of swimming in after the walk but by the time we got back down we were happy just to make our way back to Clifden to freshen up. 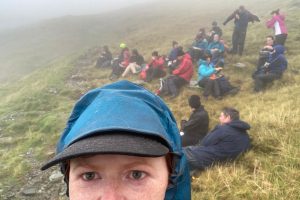 When we got back and changed, we had our evening meal organised for 7:30pm in Mannion’s Bar and Restaurant and the food was delicious. It was a great achievement for everyone and we had all made it to the top and some people had completed their four highest peaks in Ireland, one for each Province. After our meal we made our way some with sore legs back to our accommodations.

The next day we had Omey Island arranged but the tide Gods weren’t with us, as you can only drive out to this Island at low tide. Instead we decided that we would take an easy day and visit Kylemore Abbey instead. The Abbey was initially built by Henry

Mitchell for his wife after they visited this area on their honeymoon.

His was a great supporter of Home Rule for Ireland during the mid-1800s and may have also built it to create some employment in the area after the hardship of the famine. Either way it’s a very impressive looking building complete with gardens and a gothic church. Unfortunately, the woman he built it for died shortly after it was completed and she never really got to enjoy it.

It then changed many hands from very wealthy Americans “Zimmermans” until it was given to an order of Benedictine nuns from Ypres in Belgium after their monastery was bombed in 1914 during the first world war. Today its is still owned by the nuns although there are only a few left but it’s probably in better condition that it’s ever been and well worth a visit.

This visit to Kylemore concluded our trip to Connemara but there are still plenty more places to discover in this wonderful part of the west of Ireland.

View more Pictures Here from our Weekend walking in Connemara